The Shakespeare Company is Calgary’s lean and mean classical theatre company, highlighting the best of the Bard in all his comedy, tragedy, and bawdiness. 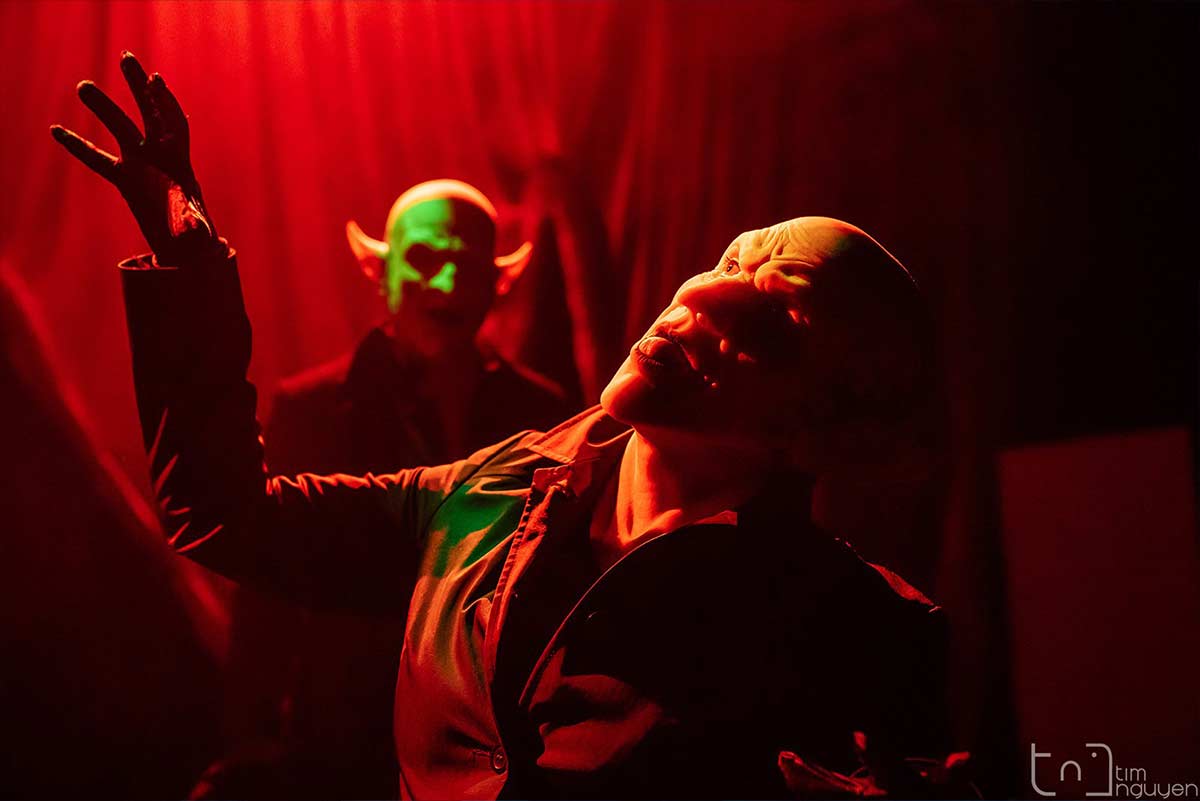 As young artists we are constantly opening ourselves up to opportunities and striving to better ourselves in our craft. That is the only way to further our careers. When Haysam Kadri told me he was bringing in Seana McKenna to direct at the Shakespeare Company I knew that this was an opportunity that I could not pass up.  I had been a huge fan of the Seana’s work and could not believe an accomplished artist like her would be directing a show in Calgary. Working with Seana McKenna was a career highlight for me.  She not only taught me how to bring Shakespearean text to life, but also empowered me to trust my instincts and myself. She carefully and expertly directed me on how to make each word feel like it was the first time it had ever been spoken. The work that I did on The Shakespeare Company’s King Lear that Seana directed was work that I felt immensely proud of. I never dreamed that I would have had the chance to work with someone of her caliber this early in my career and am very grateful to the Shakespeare Company for opening that door for me. In addition to the hands on knowledge that Seana passed on to me while working on the show, I also get to privilege of adding her name to my acting resume. This alone has created many conversations with other directors who were curious as to how my experience was working with her. It was my genuine pleasure to share what an amazing experience it was. The Shakespeare Company is dedicated to creating excellent work and has been so instrumental in enhancing my love for Shakespeare and my drive as an actor. I am beyond grateful for the many opportunities they have afforded me. I hope that in the future they will get to continue to pour into new artists and develop them in the way that they have done for me.

My name is Mihai Dan I recently graduated from the University of Calgary and in the summer of 2018, I had the chance to work with the Shakespeare company on “Much Ado About Nothing” directed by Jan Alexandra Smith. It was an absolutely amazing experience. I got to work alongside industry professionals; people whom I admire and respect, and I got to act with them. It was an exhilarating adventure that left me inspired for what the future has in store and motivated to keep growing and learning.

Transitioning from school to the professional world is such an intimidating task, you quickly learn that you don’t actually know that much which is ironic because you just spent the last four and a half years learning what to do. With the cast of Much Ado however that was not the case. Everyone was super welcoming and supportive and because I was working with professionals I got on the job training. There were so many questions I didn’t even know I had until I did this show, and there was never a time I felt like I couldn’t go ask someone a question and It wouldn’t be answered.

The experiences I had this summer will live forever in me. I learned what it really means to be part of a working cast where something is at stake. It’s impossible to teach that in school but I’m glad the Shakespeare company took a chance on me and gave me the opportunity to learn. The training as well as the connections I made are going to make a wonderful addition to my actor’s toolbox as I continue along my career path.

The Shakespeare Company has been instrumental in my career as a working actor since I graduated from the University of Calgary. In acting, specifically the theatre, Shakespeare and his works is an essential foundation for any actor, and was a significant component in my training. For myself and many emerging artists, Shakespeare's work will be a significant portion of our early working careers. This has been completely true for me, as Shakespeare is often done outdoors in the summer, and these programs are often a way for new actors to get their first professional credits. Having a professional theatre company that focuses on Shakespeare in Calgary has been unbelievably helpful to my career. These shows often involve many characters, that although small are significant in the telling of the story, and these parts are where the Shakespeare Company has cast me in at this early point in my journey. In the simplest form they are a professional credit on my resume, but they are much more. They are each an opportunity to work alongside professionals long into their career. To work directly with them from start to finish in these productions has made me grow much more than any university class. By working along side veterans such as Haysam Kadri, Seana McKenna, Jan Alexandra Smith, and many more, I have gained knowledge from observation, practical training, and connections that will be significant for me for many, many years. No other company in Calgary gives as much care and opportunity towards Emerging artists as The Shakespeare Company.

It’s been an honour to work with the Shakespeare Company as an emerging artist. With them I have played in the Bard in the Yard performance for 3 years (A Midsummer Night’s Dream twice as Puck, and an incarnation of Victors, Villains and Vixens) and in Much Ado About Nothing this past spring. In addition to acting, I’m also grateful to be their social media manager. I have the chance to add experience in marketing to my resume, which as an artist is always a great opportunity. Diversity in one’s abilities is important.

Haysam Kadri has always been a hero and an encourager of mine. His faith in and commitment to emerging artists is a huge support in our community. The Shakespeare Company has provided me with the opportunity to create what I hope will become life long friendships and working relationships.

Working with The Shakespeare Company has given me opportunity I would otherwise rarely experience, if at all. Observing the elements of a professional production as an emerging actor can be a difficult endeavour to say the least. Shakespeare, similarly, can be condemned to be read as simple text, rather than where it truly belongs: onstage. This theatre company has created an accessibility, a familiarity, and for myself personally, a home. I became involved when I was cast as Hamlet in Theatre Calgary's Shakespeare by the Bow in 2016, with a chance to explore both myself as an uncertain, ambitious graduate. From there, Haysam Kadri and Karl Sine became cornerstones and resources for my knowledge. It is so easy for young actors to feel intimidated, with a sense of nothing to offer the community without the experience of a professional production under their belt. That was a something The Shakespeare Company never allowed me to feel. I was able to establish myself, while working with theatre professionals who continued to add to my working skill. I participated in the company's outreach program with a production of As You Like It, working with actors of varied talents I could glean, like stage fighting, and a new appreciation for how difficult a comedy can be to produce. I was then cast in The Three Musketeers, and I am forever grateful for the opportunity to watch seasoned actors work, and I with them. It was surreal for an emerging actor, watching the actors I'd admired during my undergrad for years now onstage with me. My first foray into a mainstage Shakespearian debut was Much Ado About Nothing, presented this past season. Working with Jan Alexandra Smith was an experience of learning about myself as an actor, not yet emerged, but not quite new. I learned about my own process; I learned what personality I bring into the room, and I learned that I was able to work with someone with over 30 years of experience under her belt, able to share the inner workings of an industry I was just getting to know. That production made me feel as if I had passed the threshold of beginning to understand theatre, and changing the goal into finding something useful to contribute to the community. The Shakespeare Company has taught me, as an emerged actor, that I have something important to contribute, and people are listening. It is a platform that has turned my acting inspirations into colleagues, and my local community into a family.