Shakespeare’s fiery drama chronicles the cutthroat ascension of a king and the havoc he leaves in his wake as he gains power over the realm. Richard III is an unrelenting demonstration of the exercise of power.
DATES
April 13, 2023 - April 29, 2023

The Studio at Vertigo Theatre

Tickets can be purchased through Alberta Theatre Projects 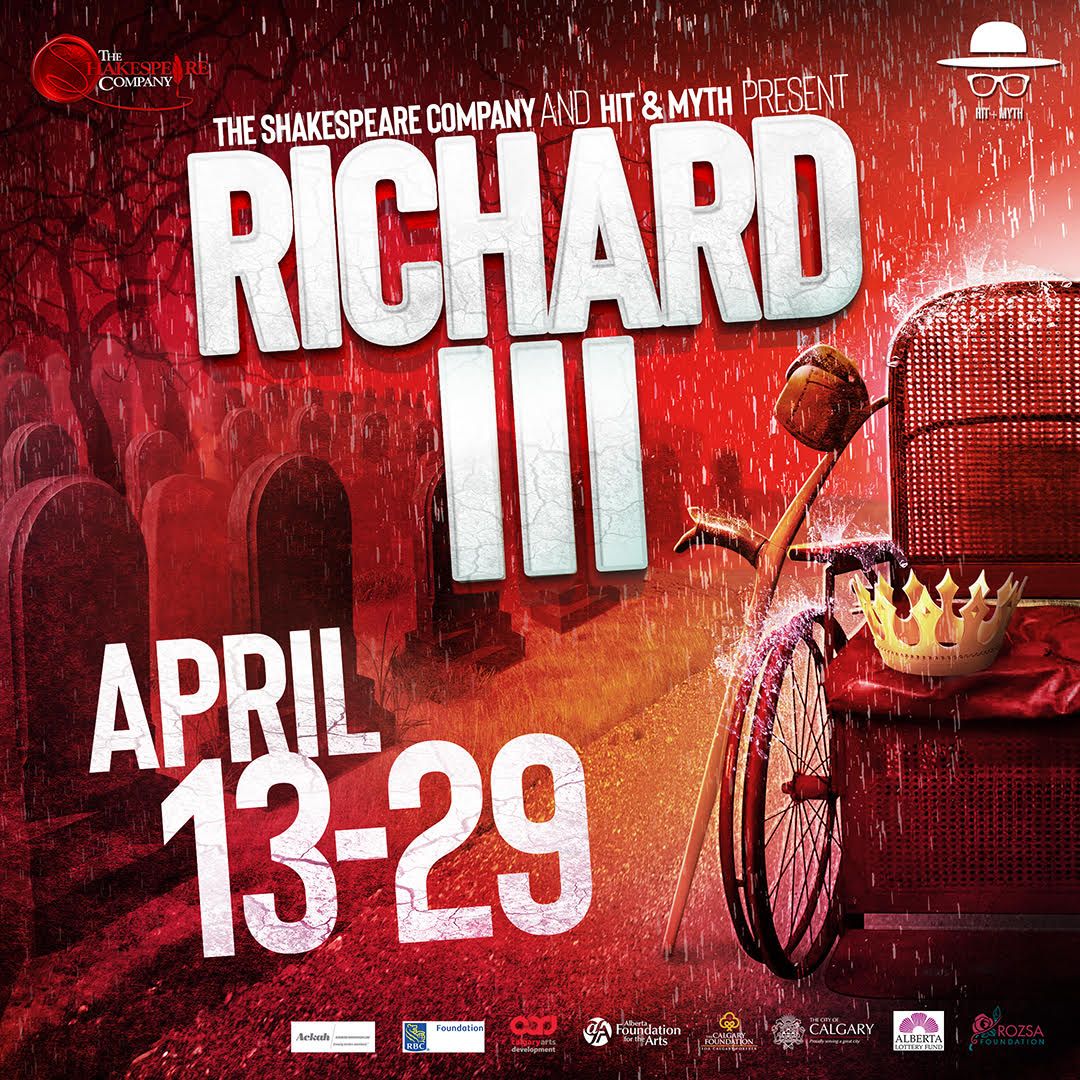 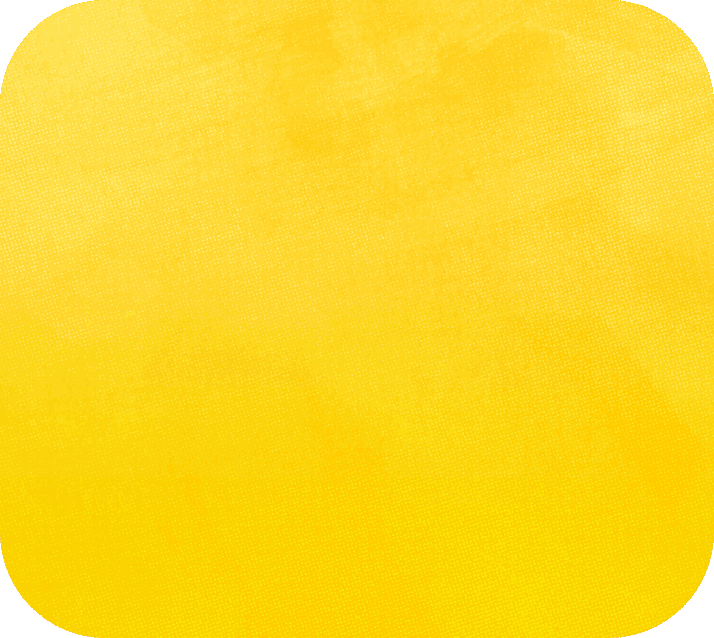 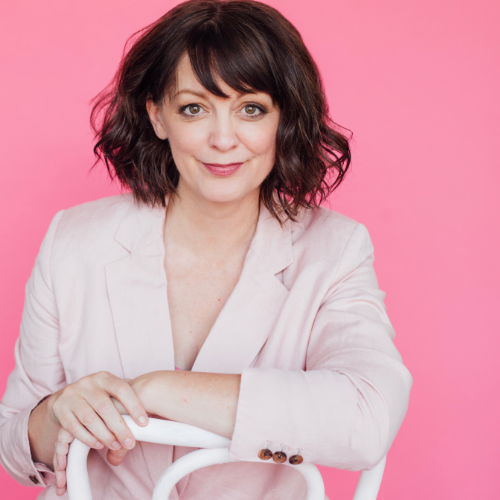 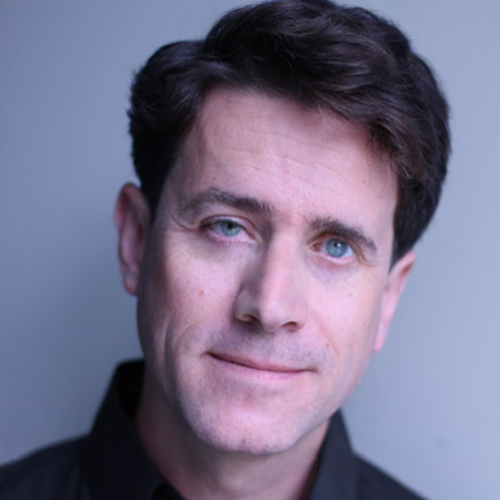 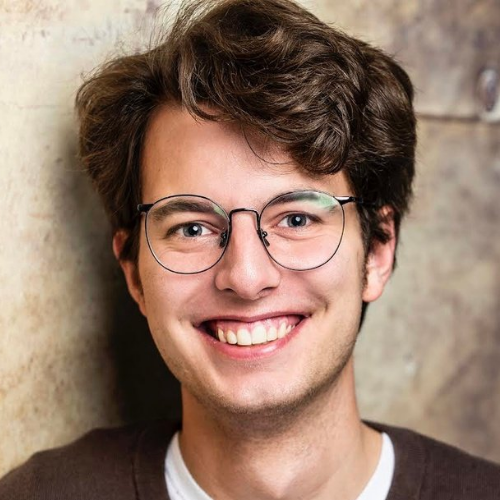 MUSICIAN*
Read Bio
*The participation of these Artists are arranged by permission of Canadian Actors’ Equity Association under the provisions of the Dance•Opera•Theatre Policy. 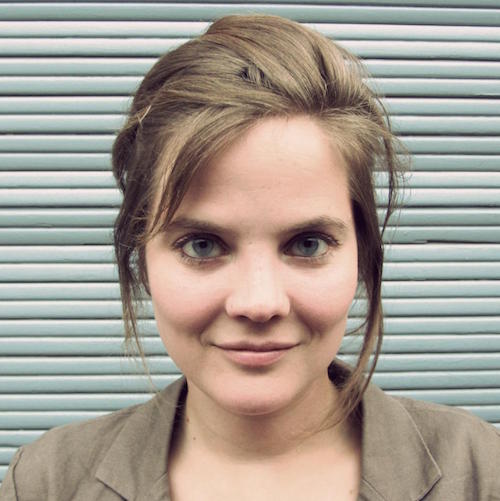 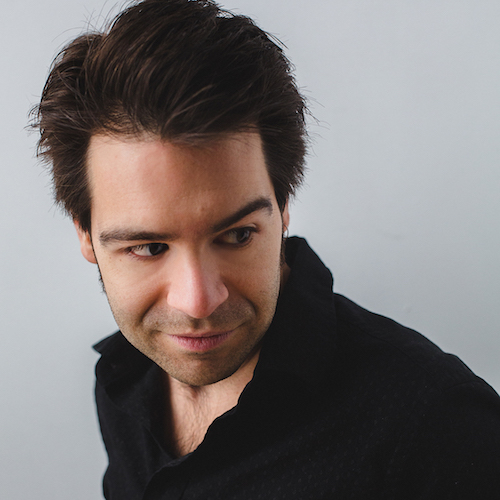 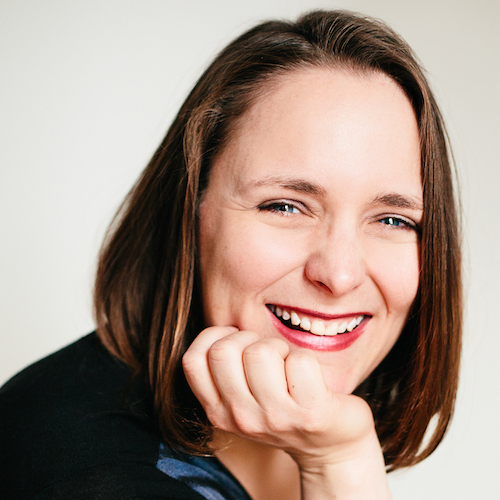 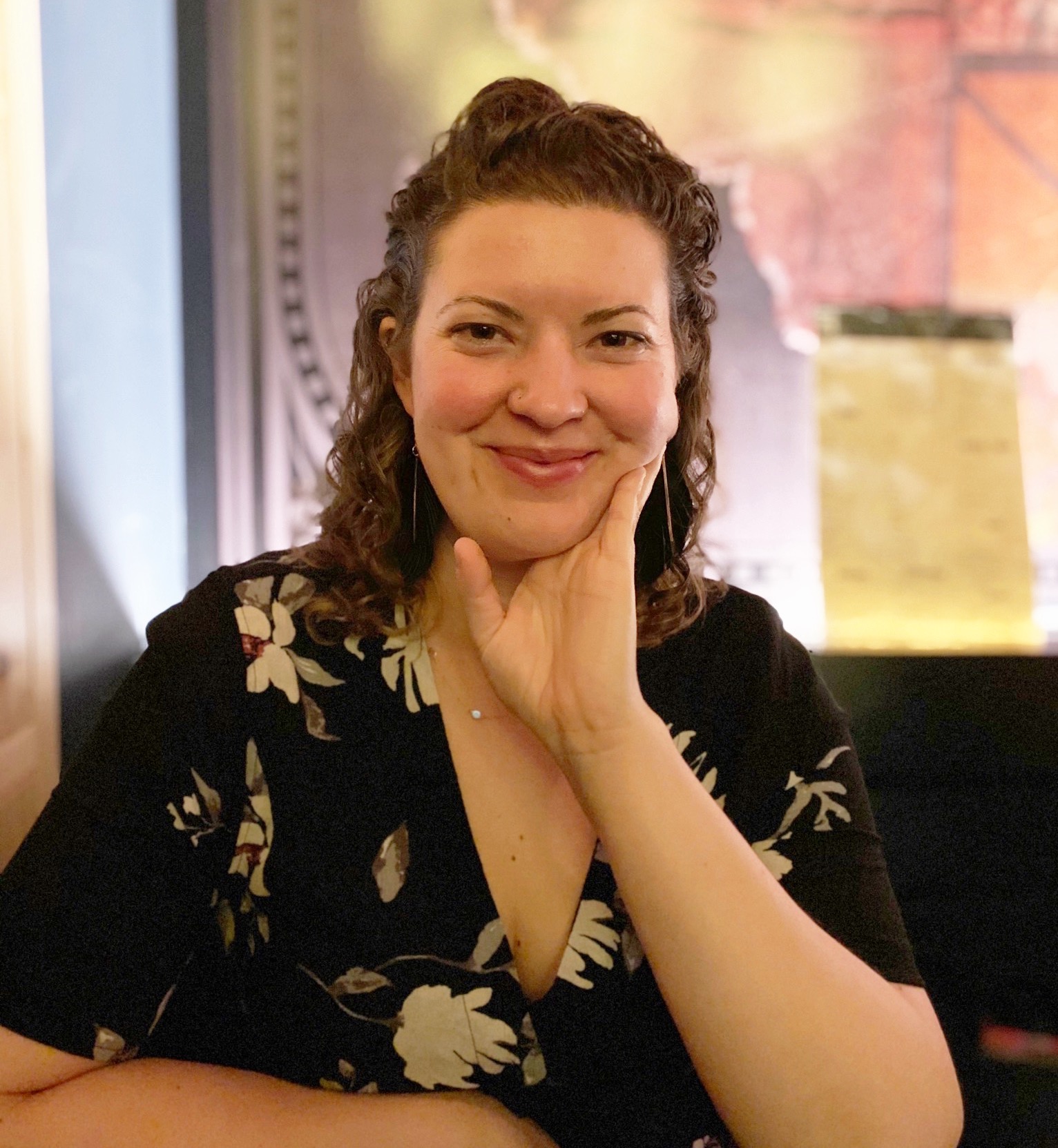 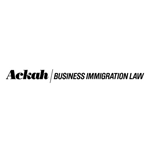 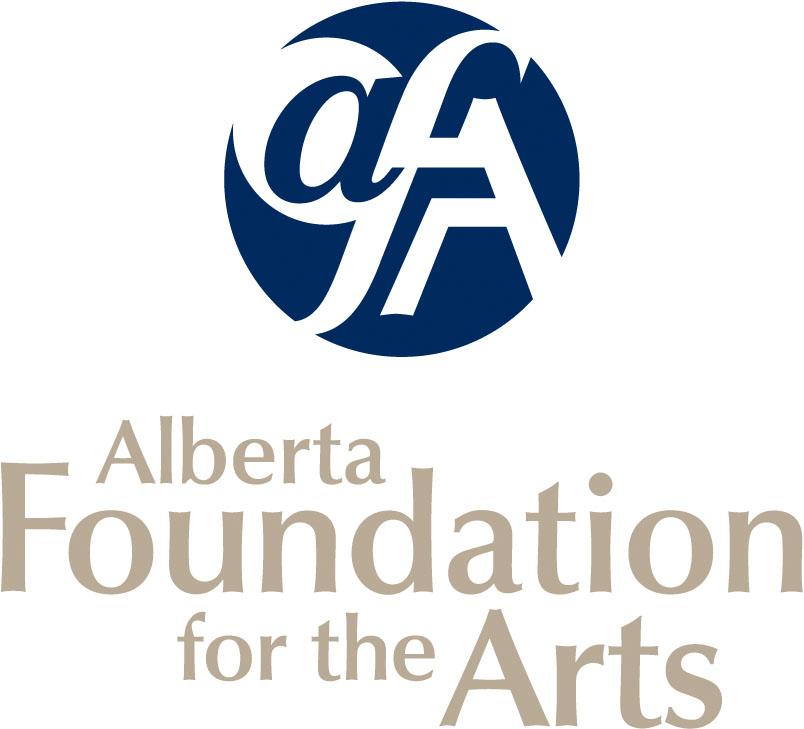 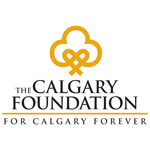 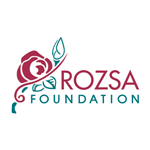 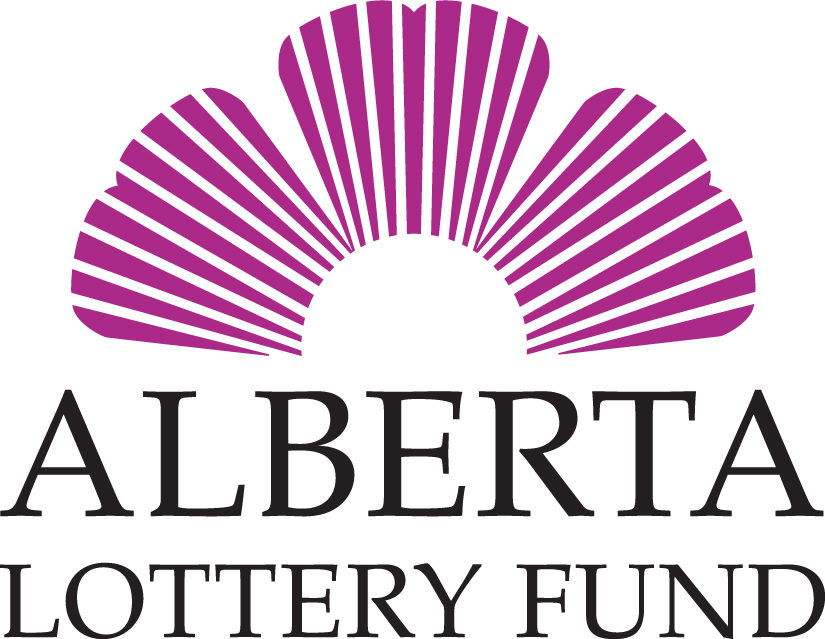 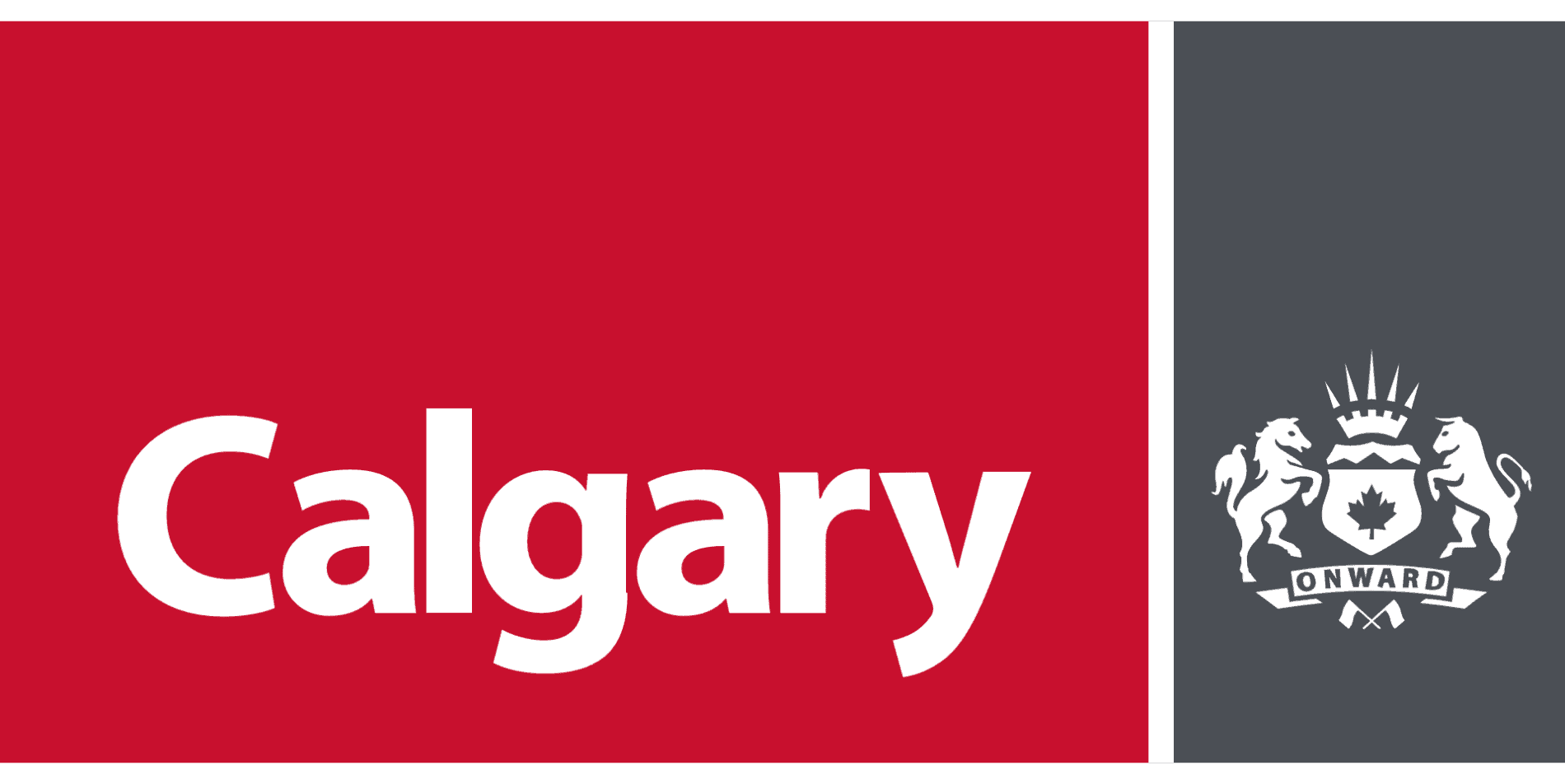 CREATOR, DIRECTOR AND PERFORMER*
Rebecca Northan is an award-winning Canadian Artist and the Artistic Producer of Spontaneous Theatre. She is the creator/director of BLIND DATE (Canada, US, UK tours), UNDERCOVER (Vertigo Theatre, Citadel Theatre, Tarragon Theatre), LEGEND HAS IT (ATP, Brooklyn Academy of Music), and AN UNDISCOVERED SHAKESPEARE (Stratford Festival of Canada). Rebecca Northan has been recognized with a Canadian Comedy Award, a Betty Mitchel Award, a Dora Award, a Denver Drama Desk Award, as well as having been nominated for a Jesse Award, a Stealing Award, and a Gemini Award. Rebecca has also been a Guest Host on This Hour Has 22 Minutes, a semi-regular panelist on CBC Radio’s ‘Because News’, and has appeared in several film & television projects. Most recently Rebecca appeared in the film, ‘Adult Adoption’ which will be featured at the Glasgow Film Festival in 2022. Rebecca is also a playwright whose plays have been produced across Canada. She is responsible for ALL I WANT FOR CHRISTMAS (Lunchbox Theatre, Centaur Theatre, Highland Arts Theatre), and KUNG FU PANTIES (Ground Zero Theatre). Rebecca also co-wrote and directed SLIPPER as well as ZORRO: FAMILY CODE (ATP). Rebecca will assistant direct The Miser at the Stratford Festival this summer.

CREATOR AND PERFORMER*
A graduate of Mount Royal University’s acting program, Bruce Horak has performed on stages from the National Arts Centre in Ottawa to the Brooklyn Academy of Music in New York. Also a visual artist, his paintings hang in private collections and galleries across the country, including a solo exhibition at the Tangled Art + Disability Gallery in Toronto. Horak’s work in film & television includes collaborations with comedy legend Rick Green, appearing as “underwear-dancing-man” in the short film ‘Gitch’ with Matthew Edison, and most recently becoming a series regular in the role of ‘Hemmer’, a blind alien on Star Trek’s ‘Strange New Worlds’. Horak and Northan have been collaborating on theatrical endeavours for over twenty years.

MUSICIAN*
Ellis Lalonde is a musician, improviser and puppeteer. Most recently Ellis joined the cast of the ‘Fraggle Rock’ reboot which shot in Calgary during the pandemic. A long-time collaborator of Horak & Northan, Ellis has lent his talents to the Spontaneous Theatre creations: LEGEND HAS IT (ATP, Brooklyn Academy of Music), and an Undiscovered Shakespeare (Stratford Festival). Ellis also appears as a Sonneteer in the Stratford Festival @Home’s production of ‘Undiscovered Sonnets’. Ellis joined the Loose Moose Theatre Company in 2011 and is a regular in ‘Gorilla Theatre’, ‘Christmoose Carol’, and numerous Kids Shows.

SET DESIGNER
For The Shakespeare Company Hanne Loosen has previously designed set and costumes for HAMLET: A GHOST STORY, MACBETH, THE THREE MUSKETEERS and costumes for ROSENCRANTZ AND GUILDENSTERN ARE DEAD. Next door at Vertigo Theatre you can see her set design for SHERLOCK HOLMES AND THE VANISHING THIMBLE. With the help of Verb Theatre and Vertigo Theatre she recently realized a design-led Experiment Lab with her installation piece FOR DESIGN’S SAKE. Hanne worked in this vibrant city as a set and costume designer with Theatre Calgary, Calgary Opera, Alberta Theatre Projects, Verb Theatre, Vertigo Theatre, Rosebud Theatre and others. Before her move to the beautiful prairies, Hanne lived in Berlin and was mainly working in opera. At the Shaw Festival Hanne designed FLUSH; a new work based on the novella by Virginia Woolf. Also at Shaw she designed costumes for THE GLASS MENAGERIE.

LIGHTING DESIGNER
Anton DeGroot is a set, light, and sound designer based in Calgary, and is the Production Manager of Lunchbox Theatre. He has worked with TSC on a good handful of shows at this point, such as Macbeth, ALL'S WELL THAT ENDS WELL, and WILLIAM SHAKESPEARE'S LAND OF THE EAD He’s also worked other places, like the Stratford Festival where he worked on HMS PINAFORE, TREASURE ISLAND, and BRONTË: THE WORLD WITHOUT. In town, you may have seen/heard his designs at Ghost River Theatre on GIANT and STRUCK; next door at Vertigo on MURDER IN THE STUDIO, NINE DRAGONS, WHISPERS IN THE DARK, TRAVELS WITH MY AUNT, and THE THIN MAN; over at Theatre Calgary on NOISES OFF! and THE SHOPLIFTERS; at ATP on THE CIRCLE, WAITING FOR THE PARADE, and COCKROACH; and up to road at Stage West on JERSEY BOYS, MAMMA MIA, and A GENTLEMAN'S GUIDE TO LOVE AND MURDER. Next time you’re out and about, you might see Anton's work on CLUE(finally) at Vertigo in a few weeks, and THE IMPORTANCE OF BEING EARNEST at Theatre Calgary in the fall. Special shout outs go to his most extraordinary partner Meg; to Tilly, Rosa and Arnie; and to his steadfast and punctual D&D group who agree that just because you’re a Goblin, it doesn’t mean you’re a monster.

LIGHTING DESIGN
Lyall Jovie is a Calgary/Mohkinstsis based Artist. They hold a BFA in Tech/Design from the University of Lethbridge, and make their home at Vertigo Theatre, managing the Studio space. They are excited to be a part of the re-emergence of theatre in these interesting times, and hope to continue building and creating as these times hopefully get a little less interesting. Recent credits include: FLORA AND FAWNA (Lunchbox Theatre, Lighting Design) THE ENCHANTED CHILD, CHRISTMAS AT THE OPERA (Calgary Opera, Lighting Design) WHAT EVER HAPPENED TO ALICE MONROE? (Blue Light Festival, co-creator) SAFEHOUSE, ALL THAT'S LEFT (Seven Starving Artists, lighting design), CALLING (Seven Starving Artists, lighting design and performer). Awards & Recognition: Outstanding Technical Merit (ADFA Provincial One-Acts Festival 2017).

PRODUCTION MANAGER
Alexandra Prichard is a Calgary-based production manager, lighting designer and sometime director. Previous work with the Shakespeare Company includes lighting design for THE THREE MUSKETEERS and THE QUEENS. Recent projects include technical director for THIS RANDOM WORLD (Fire Exit Theatre), lighting design for RING OF FIRE and MILLION DOLLAR QUARTET (Theatre Northwest), UNGANISHA (Woezo Africa Dance Theatre), and IN WONDERLAND (Alberta Theatre Projects). In 2019 she directed the premier of Michaela Jeffery's WOLF ON THE RINGSTRASSE for Spirit Fire Theatre, which was named one of the Calgary Herald's twelve plays to see in Calgary in 2019. When the goblins have gone, Alexandra will be taking IN WONDERLAND to the Gateway Theatre in Richmond in April, and is hoping to be just in time to catch the cherry blossoms.

TECHNICAL DIRECTOR
Samantha Hindle is a born and raised Calgarian whose expertise, enthusiasm and attention to detail make her a sought-after fixture on the Canadian performance scene. You will find Sam's steady hand behind events from theatre to live concerts to online presentations across Canada. She has worked on many large festivals and shows that have toured nationally and internationally. Her background is as a professional Sound Technician, Stage Manager, Production Manager and Technical Director. Many thanks and love to her wonderful family and sweetie.